10 May ROLLING STONE: Valerie June on Her Journey From Smashing Pumpkins Fan to Folk-Soul Star

Even in trendy Williamsburg, Brooklyn, Valerie June stands out: star-studded sunglasses, a sparkly silver blouse and a plume of thick dreadlocks that sprout in all directions. At her favorite neighborhood bistro, she attracts the attention of a bald customer who approaches her table to hand her his business card. “Love your hair,” he says flirtatiously. “Maybe you could give me some.” “I might!” June replies with a laugh. 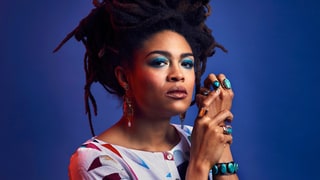 June, 35, smiles again when asked about another compliment she received recently. In an interview posted on his website, Bob Dylan said he’d been listening to June, whose latest album, The Order of Time, is a blend of spacey hippie soul, blues and folk with June’s pinched, modern-Appalachian voice at the center. “I lost it,” June says of the Dylan shout-out. “My biggest gift, I feel, is songwriting. So to have the god of songwriting mention he was listening to my music is huge. I never went to college, so I felt like when he mentioned my name, I got my degree that day.”

The nod of approval is the latest surprise in June’s long-delayed rise. As one of five kids growing up near Jackson, Tennessee, she received her first taste of show business early on; her father was a part-time concert promoter and enlisted his daughter to help prep the backstage rooms for acts like Bobby Womack. But getting towels for headliners only taught her that she wanted to be onstage instead. She grew up singing in a church so pure it didn’t allow instruments, but at home she listened to what her mom referred to as “drug music.” “I loved Smashing Pumpkins,” June says. “I don’t know how cool it is to say that now.” Nirvana’s version of Lead Belly’s “Where Did You Sleep Last Night” opened her ears to blues. “The white boy led me to the black man,” she says. “It was me looking for the root.”  Read more here.