“Songs have hopes and desires bigger than me,” says Memphis blues-folk artist Valerie June. “Just like a person does. I think everything is living. If you didn’t notice, I’m totally emotional and everything has feelings.” 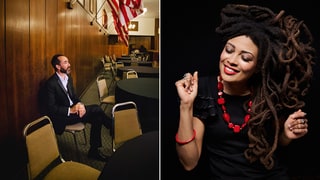 For June, music is a living, breathing thing. So is everything, really – from the instruments she strums to the rooms she plays in. On The Order of Time, the follow up to her debut, Pushin’ Against a Stone, this idea took on even more of a visceral significance: June’s father, Emerson Hockett, passed away after a long illness in November, but his vocals landed on “Shakedown.” Hockett’s most immortal relic – his recorded voice – appears an album about balancing the finite nature of time with the hope that it’s all more perfect circle than dead end.

Melding a nasal voice that is at once young and old – sometimes she’s trying to sing like a grandfather, other times, a child, thinning the lines between both – with blues, folk and gospel, The Order of Time is from one generation with a shadow that hangs in another. But if June has her way, where or when will never be exactly clear. Like on “Man Done Wrong,” there’s the familiar ring of the banjo, but the neo-folk instrument du jour is deeply tonal, referencing the instrument’s often overlooked African roots.